If you’re one who loves to travel to destinations off the beaten track where electricity barely exists; if you’re the type to spend week-long vacations in the hidden gems of nature, where no power outlet is available; if you’re one who tends to forget your charger when traveling, for some strange reason (like me); if you’re one to carry multiple gadgets – well, who isn’t nowadays – then Dark Energy’s The Reservoir is aiming their mobile charger at you. 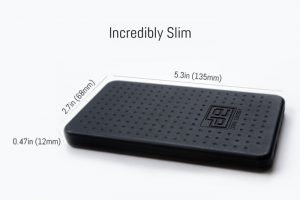 For one thing, it is sleek and light, meaning it is easy to carry around with only merely half an inch thickness or .47 inches (roughly 12mm), making it the thinnest charger in its class. It also weighs 5.9 ounces, still one of the lightest portable chargers today.

Sometimes you have too many gadgets and you don’t have much time to wait for all of them to get charged. The Reservoir cuts your waiting to half as it offers dual USB output so you can charge two devices at the same time while also getting the same power as provided by a wall socket. That’s less charging time and more charged devices.

Best of all, it offers massive energy storage of 8000 mAh that can provide power to your devices (yes, in plural) for a week. Its inventors claim that it can charge an Apple iPhone5 five times, a Samsung t159 nine times, and an Amazon Kindle eight times. Interestingly, should The Reservoir remain unused, it can retain the energy for more than a year.

Aside from its 500-plus times recharge cycle, other features include temperature management, overcharge and short circuit protection and on-unit power indicator. 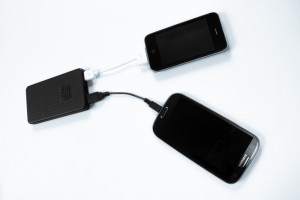 Dark Energy, its creator, has been largely influenced by the events in the wake of Hurricane Sandy which led them to creating something that can produce power during emergency situations. The result is “the perfect” portable charger that has sought funding in Kickstarter. Once funding is completed, the company will start manufacturing and shipping the Reservoir. Those who pledged will get a limited edition waterproof bag for their Reservoir.