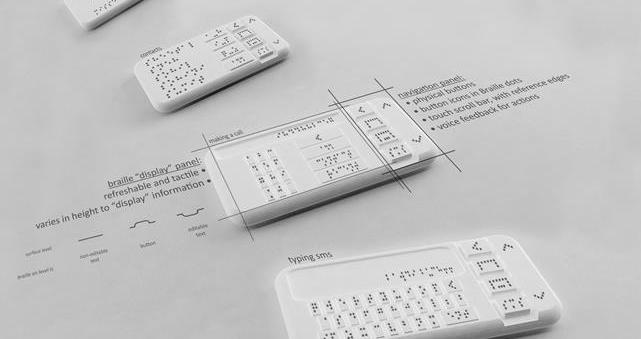 When it comes down to it, it’s safe to state that smartphones are very visually dependent mobile gadgets. Sure we can argue that touch plays an important role to because of the heat or pressure sensitive screens. But it still holds that in order to operate a smartphone effectively you would have to use your eyes to locate various icons and coordinate your “touch” properly. With this in mind, the setbacks facing the blind when it comes to smartphone usage are huge. Fortunately, a startup company based in India named Kriyate is working on a smartphone that operates using Braille, providing the blind with the ability to enjoy and use smartphones the same way as their seeing counterparts.

Kriyate’s smartphone initiative comes from Sumit Dagar, the man in charge of developing the technology for a would-be Braille smartphone for the blind. In collaborating with the Indian Institute of Techonology Delhi (ITT-Delhi) and the LV Prasad Eye Institute, Dagar hopes to come up with a working model for the Braille smartphone sometime next year.

The phone, according to Dagar, will be equipped with a Braille display that retracts a grid of pins that the blind can use to read what’s on the screen and navigate the smartphone. The retractable pins would indicate Braille letters and words to allow this capability. The concept is a refreshing one and an eager attempt at giving users the opportunity to “read” their smartphones. Most other developers of mobile gadgets for the blind focus excessively on voice commands, vibrations, and beeping sounds to be able to say that their products cater to the needs of the visually impaired. Though Dagar’s Braille smartphone will still possess these very mechanisms, they are there to support the main work provided by the retractable pins.

Kriyate’s Braille smartphone will retail sometime next year at the price of $184. Its release into the market will carve Kriyate a special niche in the market of smartphones catering to the blind, but it should be noted that the company isn’t alone. Another company called Qualcomm has developed a “blind-friendly smartphone” that integrates many functions into one phone. The smartphone, termed “RAY,” allows visually impaired users to call, compose text messages through a vocal read-out, read audiobooks, seek remote assistance, navigate the phone, and participate in social network services. Conceptually different from the Kriyate Braille Smartphone, the Qualcomm “RAY” uses built-in vibrations and voice prompts to learn the patterns of behavior of its user.