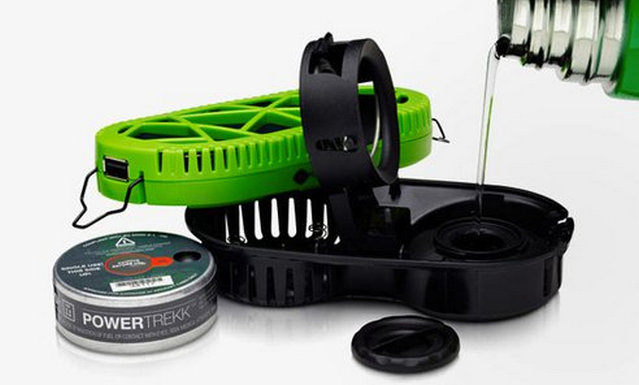 Skipping out on bringing chargers for your mobile gadgets on extended trips or a normally long day usually means packing a portable mobile charger with you. And that’s a convenient alternative in itself. But once your portable mobile charger runs out of juice, it would soon have you running back to the nearest socket to keep your mobile gadgets running. The exciting news about the myFC Powertrekk is that you don’t need to cut, say, your three-day hiking trip in the mountains just to charge your gadgets. With the Powertrekk, you only need to worry about one thing to recharge your gadgets: a consistent supply of water.

The myFC Powertrekk fuel cell charger works by converting the hydrogen found in water into fuel. Made from a fuel cell and a battery pack, the Powertrekk charges mobile gadgets through USB. What’s even more interesting about the Powertrekk is that you need less water than you think to get it to start fueling up. The unit only needs a tablespoon of water and a pukk (myFC’s term for the Powertrekk’s fuel pack) to get its “flexifuel” process running. To understand how the Powertrekk operates within this seeming miracle, it pays to take a closer look at its FuelCellSticker technology. The technology is made of foils and adhesives that only take up 2.75mm of space in the unit. There are no fancy whirring parts to speak of; the technology in myFC Powertrekk is pure chemistry. The fuel cell charger does its magic by employing its Proton Exchange Membrane to morph hydrogen into electricity. The electricity generated is then stored in the battery pack or directed to the mobile gadget, if one happens to be connected to the Powertrekk unit. Just make sure to keep the fuel cell exposed to the air in the process to get it to work. myFC is marketing Powertrekk’s FuelCellSticker technology as something that’s safe for both the user and the environment. There are no harmful bi-products produced, just some water vapor that adds a little moisture into the air.

The myFC Powertrekk hasn’t been released into the market yet, but it is scheduled to be available to consumers sometime within the first quarter of the year. Units will most likely be available through myFC’s website with a list of other distributors and retailers following suit after more details have surfaced. As of now, the myFC Powertrekk’s retail price is set at $229.

How To Pick A Mobile USB Charger