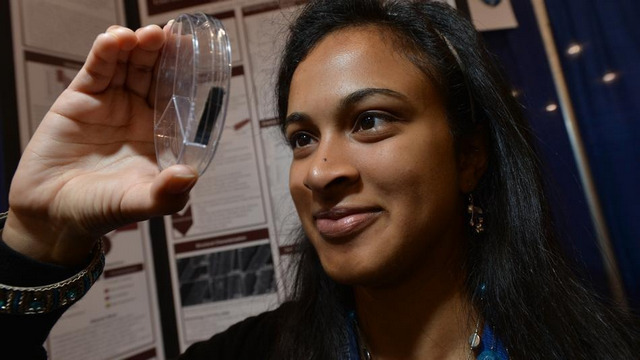 Smartphone, tablets, and other mobile gadgets are extremely useful for a variety of applications. They can serve as phone, e-readers, internet browsers and more than a few other things. But their advantages come with one crucial shortcoming, a slow-charging and at times short-lived battery. Soon, the hours of waiting for your smartphones and tablets to reach a full charge may soon be over. The Intel International Science and Engineering Fair exploded with the story of Eesha Khare, the 18-year-old who invented a super-capacitor that could vanish all those long waits by electric outlets once and for all.

Her invention of a super-capacitor that could eventually charge batteries to full state in seconds won Eesha Khare the Intel Foundation’s Young Scientist Award, presented in Phoenix, Arizona. The idea of a super-capacitator came to Khare when she got tired of her cellphone’s battery, which often died through repeated charging. This is something that has happened to us way too many times, so we are excited to get Eesha’s invention through production in our hands and in our phones! 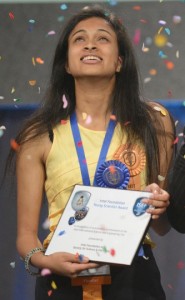 Eesha Khare’s super-capacitor, which was presented at the Intel Fair just this month in Phoenix, Arizona, also awoke the inventor’s interest in nanochemistry and storage technology, a plus and insurance that young minds will continue to contribute to the advancement of the potential of electronic devices.

The teen, who hails from Saratoga, California, eventually came up with a working super-capacitor, a miniature power source that could power devices quickly and is capable of maintaining that power for a long time. Khare’s super-capacitator is reported to last 10,000 charge-recharge cycles, a longevity significantly greater than the 1,000 charge cycles offered by standard rechargeable batteries. In terms of charging speed, the super-capacitator can allegedly charge mobile devices within 20 to 30 seconds.

In a video interview in Phoenix, Eeshas explained:

“The super-capacitor I have developed uses a special nanostructure, which allows for a lot greater energy per unit volume,” Khare said in a video interview at last week’s 2013 Intel International Science and Engineering Fair in Phoenix.

“It can charge very quickly, and it can last for 10,000 cycles, compared to batteries which are only like 1,000 cycles,” stated Khare.

“After charging my super-capacitor for 20 seconds, I was able to light an LED device,” she said. “Just seeing that LED light was my signal that I know what I’m doing, and this is truly applicable to the real world.”

For once, it is a high school teenager, not one of the big technology companies, who found a way to innovate and contribute to the ever expanding knowledge in technology. As a reward for her contribution, Eesha Khare also received $50,000 in prize money alongside her Young Scientist Award.