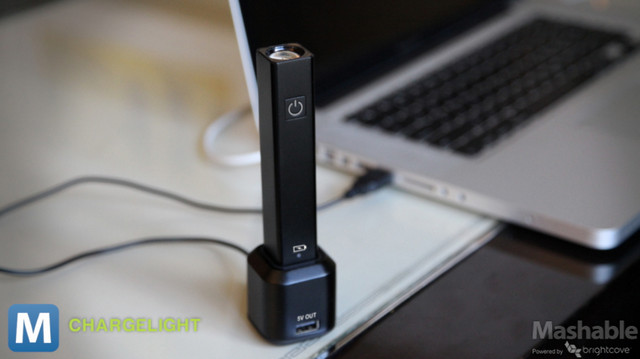 Smartphone chargers – and mobile device chargers in general – are getting more and more diverse in the way they are executed and designed by companies. Companies are putting out all sorts of varieties on the market in order to find a niche that will attract enough customers to their products. A lot of these companies have innovative ideas, though; therefore, their eagerness to find a niche within which to find a loyal customer base is still well-founded. Among these well-founded and innovative smartphone chargers is the ChargeLight, a Kickstarter project of a charger that also doubles as an LED flashlight, useful for more than just a dead battery emergency.

The ChargeLight is being marketed on Kickstarter as the “most powerful and compact LED flashlight and battery pack ever.” While it’s wary to subscribe blindly to any statement, it’s clear that the ChargeLight has more than its fair share of useful features. Even though it’s being primarily marketed as a smartphone charger, the ChargeLight can charge just about any mobile device. Among those compatible with the device are cameras, music players, and, of course, smartphones; but as long as it has a compatible USB port, the ChargeLight should have no problem charging it.

The ChargeLight, as previously mentioned, is compatible with a number of popular devices. It can charge Apple, Blackberry, HTC, Nokia, and Samsung mobile devices. If you’re curious to know which ones, you can drop by at ChargeLight’s Kickstarter page to find out. Being a Kickstarter project, you have to pledge money at the Kickstarter website to even get a chance to see this product into the manufacturing stage. Fortunately, the ChargeLights seems to be well on its way there. It currently has more than 660 backers, has raised $81,198 in funds (it needs $100,000 total to reach its goal), and has some 9 days to go before the pledging ends.

DIY Mobile Charger from a Flashlight