Your mobile device running out of battery is already a common scene. You bring out your portable charger to juice up but then realize, it’s not enough to power your three smartphones and tablet. How you wish your mobile charger is much more powerful. Then you read about New Trent’s PowerPak+, its largest battery capacity to date with its 13,500mAh power. You’re feeling a lot better.

PowerPak+, a portable smartphone and tablet battery pack, has the power to charge phones or tablets up to six times. Built to last, the USB charger guarantees a 500x charge cycle for your PowerPak+. It comes with a dual USB with 1A and 2A charge ports, which means you can even charge two phones at simultaneously. 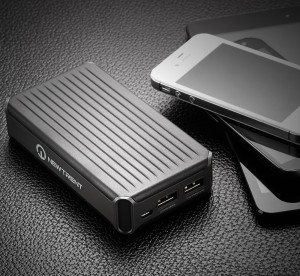 Compact and lightweight, PowerPak+ is compatible with a wide range of smartphones and tabs. Looking both tough and handsome with its rugged scratch-resistant exterior and ribbed casing, PowerPak+ can withstand hiking, camping, backpacking, or any other serious outdoor activities. So even if you are in the middle of nowhere, your smartphone and/or tablet will remain useful.

Other products New Trent is currently offering in the market now include the New Trent EasyPak, which is intended to charge tablets and is compatible with popular brands like Apple, Blackberry, Samsung, Motorola, Nokia, HTC and Sony. But get this – it can charge three devices at once! Another New Trent product hot in the market is the iCarrier, a heavy duty dual charger that has two outlets and able to charge mobile phones up to six times. Like the New Trent EasyPak, the iCarrier is compatible with Apple, Blackberry, Samsung, Motorola, Nokia, HTC, and Sony device. But the most portable external charger of New Trent is the iTorch. Boasting a built-in laser and LED flashlight, the iTorch works with the 30-pin Apple cable.

So far, New Trent products have been consistent in getting positive reviews, save for the Travelpak Battery Charger which is said to only work well when plugged into an outlet. Nevertheless, users are still generally happy with the TravelPak Battery Charger, which also doubles as an LED light when charging.

If you hate having dead smartphones or tablets, it is high time to get a mobile charger from New Trent. The PowerPak+ is out in the market and is being sold for $69.95.