Do you think you can survive without electric power for a day? Just the thought of it can send panic attacks to some of us. How do you get through the day without having the means to charge your essential gadgets like tablets and smartphones? Well, it sure is a good thing that SolarFocus has developed a solar power charger that keeps your gadgets fully juiced up even without electricity. All you need is the sun.

SolarFocus’ Solar Mio Pro USB charger is not just your ordinary USB power pack. It is so lightweight and small, weighing only about 0.6 lbs and measuring just around 8.7″ x 3.3″ x 1.4″. It can easily fit in your bag or even in your jacket. But what makes Solar Mio Pro USB charger really different from other USB chargers is its solar panels, which efficiently store in solar power from the sun. SolarFocus boasts of the design of the solar panels which they claim to yield high output (a maximum of 600 mA at 6V) and broad spectrum coverage. It’s easy to keep your gadgets fully charged wherever you go so long as the sun is out and about.

How long do you need to charge the power pack under the sun? It depends. When it is cloudy, you would have to charge it longer. Eight to ten hours would do. But if you get to use it under direct sunlight, expect it to charge fully in just four to six hours. However, make sure that you do not expose the Solar Mio Pro USB charger to rain or moisture as it may damage the unit or cause it to malfunction. 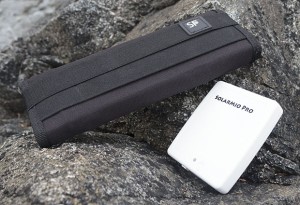