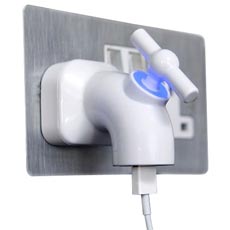 Who does not need a spare charger? With people owning two or more gadgets, it is really practical to get another charger that you can keep in your school or office while you leave the other charger at home. It is also a smart idea to have a spare charger that you can bring with you when you travel elsewhere. The iTap USB charger for smartphones and tablets has taken uniqueness and quirkiness to a whole new level.

Don’t be surprised. Without the USB cable attached to it, the iTap USB charger can be mistaken for a faucet that has been removed from your kitchen! How come? Well, the iTap, made of white durable plastic, literally looks like a PVC water tap that allows electric current to flow into your gadgets, mimicking water current flowing from a water tap. Some sense of humor, huh? But it does not end there. The iTap charger is equipped with LED lights that turn red or blue, which seems to mimic this time the cold and hot indicator for water. The light becomes red when you turn it off and put the charger on standby. On the other hand, the light turns blue when you turn it on to charge your smartphone or tablet. 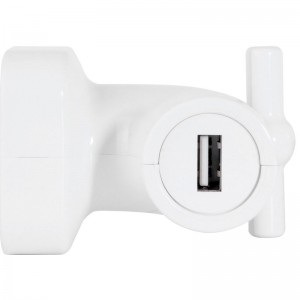 Compatible with USB devices, the iTap charges smartphones and tablets easily. Just plug it into a power socket and have the other end connected to your gadget. Then twist the iTap just like how you would a water faucet to start charging your device. Twist it back again if you are done.

The iTap USB charger can be fun to use at first (with its looks and lights!) but its unique and funky design can actually backfire eventually because it can be bulky. There are quite a number of USB chargers which, although boring in appearance, are more handy and easy to bring and carry around. That seems to be the trade-off for using the iTap USB charger. It is up to you to decide then whether you would go for something cute or something handy.

The iTap charger is sold at www.prezzybox.com for $31.