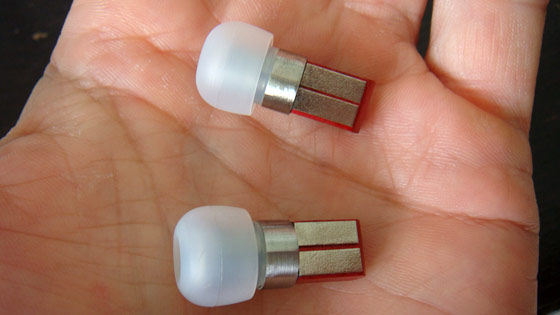 The word “innovative” gets thrown around a lot these days, but I feel that it’s the most appropriate word to describe the Split Earbuds from Greenwing Audio. This 3-person startup company from Miami Beach, Florida has come up with a completely new and original way to listen to music.

Let me explain what makes their idea so different from other earbud headphones on the market. If you’re like most people, you probably use your iPhone or Android smartphone for listening to music. The phone is a player, which stores the audio tracks digitally and converts them to an analog signal. That signal becomes a sound wave by means of a speaker driver, such as those found in a pair of speakers, or a tiny version inside a pair of headphones.

The Split Earbuds combine the player and the earbuds into one device. You don’t plug them in to anything. You don’t pair them wirelessly with your phone. The earbuds ARE the player!

The truly innovative part is that during playback, the earbuds are not communicating with each other. There is no Bluetooth and no Wi-Fi keeping things in sync. Instead, each of the two earbuds has a highly accurate crystal clock to keep the songs synchronized. A short radio signal lasting less than one millisecond tells the other earbud when you adjust the volume, pause, or skip to the next track. The earbuds are controlled by touch and by bite (!).

An added benefit of these earbuds is that they are great for people who are hyper-sensitive to electromagnetic frequencies.

Each pair of Split Earbuds has 256MB of memory, which is enough to store approximately 60 songs. That’s not very much, but this is a first generation product here.

Greenwing Audio have launched a Kickstarter campaign to fund the production of Split Earbuds. As of this publication, the campaign had raised $61,537 – a far cry short of their $435,000 goal.

It remains to be seen if the funding for Split Earbuds will ever come through, or if this project will never go beyond a proof of concept. Whatever happens, I am thoroughly impressed by the design and engineering of these truly cordless earbuds!

Will Loud Earbuds Be Outlawed?

How To: Cleaning In-Ear Earbuds

How To Tell Your Right Earbud From Your Left