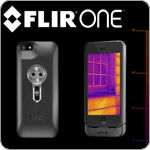 We saw a lot of cool gadgets at the 2014 International CES Show in Las Vegas, but one of the most interesting was a thermal imaging camera for the Apple iPhone 5 and 5s. Made by FLIR Systems, the FLIR One is the company’s brand new infrared camera for smartphone users.

We caught up with Jeff Frank from FLIR Systems and he showed us some of the features and capabilities of the FLIR One. Check out our video for a complete overview and demo:

The FLIR One is also able to measure temperature differences, assist with home repairs, and can even be used as a personal safety device in total darkness environments. Around the house, it can help identify moisture spots, pipes and studs within walls, and can help save on utility bills by identifying thermal losses near doors, windows, and electrical outlets. When going for walks at night, the camera will show the heat signature of any person nearby, regardless of whether they are hidden from view. 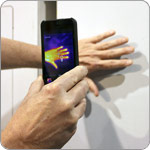 The FLIR One is about the size of a rugged phone case. It has two cameras, one for infrared light and one for visible light. The system combines data from both cameras to produce a high-resolution thermal image in real time.

As if that weren’t enough, the case contains a battery which can run the thermal camera for up to 2 hours. The battery can also be used to boost the phone’s runtime by up to 50%!

FLIR Systems has a long history of making commercial and industrial imaging cameras going back to the 1970s. This is one of the company’s first products targeted at regular customers like you and me.

I think this is an interesting accessory because it really shows off the versatility of the iPhone 5 platform. FLIR have also released a development kit for the camera, which will allow third-party companies to use the camera’s hardware in their own apps. A version of the camera for select Android phones is due out later this year; no word yet on whether the company will develop an iPad version.

With a price point of around $350, the FLIR One will be significantly less expensive than any other thermal imaging camera available to consumers. It is expected to be available in the Spring of 2014.