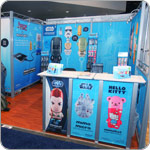 We caught up with the folks from Mimoco in their booth at CES 2014. In the past, we have written about their line of MimoBot character-shaped USB flash drives on our sister site PremiumUSB Blog. We stopped by to check out what they’re working on now, and boy, are we glad we did!

New for 2014, Mimoco will be launching a line of BatteryBot USB mobile chargers. These power banks will provide a recharge to any smartphone or tablet while on the go. In a world of ever-more-powerful mobile devices, battery life is more critical than ever.

The BatteryBot product line was entirely crowd-funded through a Kickstarter campaign in late 2013. The company established a goal of $65,000 to start production, and actually exceeded their goal, raising a total of $88,202 from more than 1,200 backers!

This is really quite interesting because most of the Kickstarter projects that I’ve seen are from startups and entrepreneurs, not from established companies.

Nonetheless, Mimoco has begun production and as you’ll see in the video, the drives should begin shipping out this summer. With characters from Adventure Time as well as Star Wars, these unique-shaped USB chargers are a fun and funky way to keep your smartphone or other device juiced up.

Each BatteryBot will have a 5,200mAh battery, which can be recharged from any USB port. This will provide enough for approximately 2-3 full recharges, depending on your smartphone. The price is expected to be about $69 each, which isn’t bad considering the fact that it has a generous power reserve and the unique, one-of-a-kind shape you just cannot get anywhere else.

We look forward to seeing the BatteryBot when it comes out this summer, and we’d like to congratulate Mimoco on their Kickstarter success!