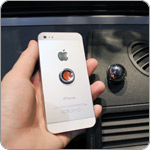 With so many great location-based apps available for smartphones and tablets, it makes sense to use them on the road. But how do you secure a device to your car’s dashboard, while also making it easy to remove for safekeeping? One way to do that is with a car mount kit from Nite Ize (pronounced “night eyes”).

The Steelie Car Mount Kit consists of two pieces: a big chrome ball and a magnetic ring. The ball attaches to your vehicle’s dashboard and the ring attaches to the back of your device. If you don’t have a super square dashboard, don’t worry. Each item is secured in place with 3M’s super-strong VHB tape. 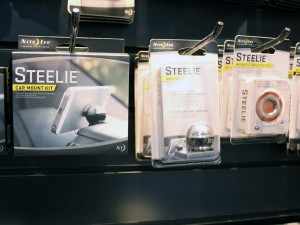 What makes the Steelie Car Mount different from other in-dash mounts is that it does not attach to the windshield, which can block visibility. It is also not a dock or cradle, which means that all of the device’s buttons and ports are accessible.

Another cool thing about the Steelie Car Mount is that you can install the bases in multiple vehicles, which is useful when frequently moving the same device between two or more vehicles. For example, using your smartphone in your work vehicle and in your personal vehicle; or moving a small tablet between your car and your spouse’s car.

The whole thing is relatively inexpensive. The Steelie Car Mount Kit is just $34.99, and additional rings are available for $14.99. It seems like a good price for a no-drill system that’s completely removable. Have you tried the Steelie Mount (or another in-car mounting system?) Post your thoughts and let us know!