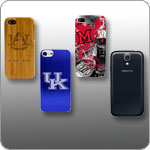 Okay, survey time. Do you use a case to protect your smartphone? Well according to a recent survey by the NPD Group, approximately 25% of smartphone owners do not use a case at all. The NPD Group is a market research firm based in Port Washington, New York. They have been studying consumer usage of electronics (and a dozen other industries) since 1984.

Their most recent survey (officially titled “Smartphone Case Segmentation Study”) asked more than 3,200 U.S. consumers ages 13 and up about their preferences regarding phone cases in September of 2013. What they found was surprising: 25% of smartphone users do not use a case to protect their phone.

For many Americans, a smartphone is a critical “must-have” daily carry item. A smartphone provides entertainment, information, and of course, communication with friends and family. With phones playing such an important role in our personal and professional lives, I would have expected more people to take steps towards protecting their phones from scratches, damage, and falls. Honestly, it surprised me to hear that the number of people without a case was so high. 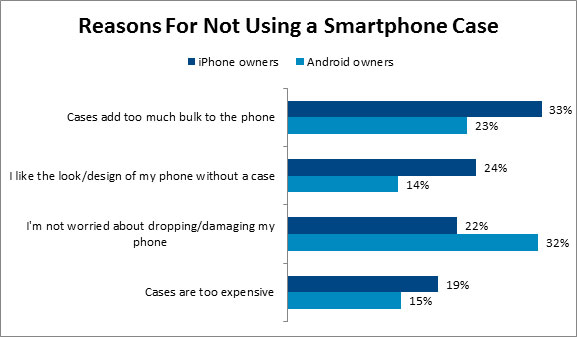 Source: The NPD Group/Smartphone Case Segmentation Study
Base: Smartphone owners who do not use a case

As you can see from the chart, the main reservation that iPhone owners have about purchasing a case is the added bulk that comes with it. For Android owners, the majority of smartphone owners without a case simply aren’t worried about dropping their phone. Clearly, different customers buy (or don’t buy) phone cases based on different reasons.

The NPD Group has identified 5 types of consumers who buy phone cases. These are:
“The Quality Protector:” Their ultimate goal is to protect their smartphone.
“The Fashionista:” Uses their phone as a platform of personal expression with style/fashion of top importance
“Cute and Cheap:” Similar to Fashionistas, but considerably more sensitive to cost.
“The Basic Protector:” Tends to be the least selective and doesn’t put much thought into the case selection process.
“The Savvy Enthusiast:” Overly enthusiastic about cases and technology, in general.

What I found particularly interesting about this study is the different preferences that iPhone and Android owners have for protecting their phones. To quote the study “…nearly 9-in-10 iPhone owners (87 percent) use a protective case with their phone- higher than the average for all smartphone users.  Meanwhile, just two-in-three (66 percent) Android phone owners use a protective case.”