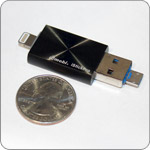 In June of 2014, Hyper launched a Kickstarter campaign to produce the iStick – a USB flash drive that would connect to smartphones and tablets as well as computers. It was notable for being the first USB drive to include an Apple Lightning connector.

The wildly popular campaign blew past its stretch goal and raised over $1 million USD – more than 10x what the project was seeking to raise!

At CES 2015 in Las Vegas, Hyper was showing off their new iStick Pro model. Like the original, this one features both an Apple Lightning connector as well as a Micro USB connector.

The iStick Pro features an aluminum body while the original iStick was made of plastic. We caught up with Jennifer from Hyper who told us a bit more about the new drive.

The iStick Pro comes in capacities ranging from 8GB to 128GB and will be available later this year. The iStick Pro is the latest evolution of a great idea. We hope to see more from Hyper in the future!